Gliding is both a sport and a hobby.

The challenge for the glider pilot then is to be able to understand, locate, and utilise natural sources of energy in the atmosphere in order to achieve the goals of distance, height, or simply duration that they have set themselves.

There are a few different ways to launch gliders, and at Darlton Gliding Club, we use two methods of launching.

Winch Launching: the glider is hooked on to a steel cable. At a pre-arranged signal, the winch – situated at the far end of the airfield (over a kilometre away) – starts winding in the cable. The glider is quickly accelerated, becomes airborne, and can then rapidly climb to heights of approximately 1,200 ft to 2,000 ft (depending on wind conditions). At the top of this climb, the winch cable is released, and falls to the ground under a small parachute. Meanwhile the glider is free to fly away.

Aerotow Launching: a powered aircraft is attached to a glider with a tow rope that takes the glider to the height and location requested by the pilot where the glider pilot releases the tow rope, and then soars away. 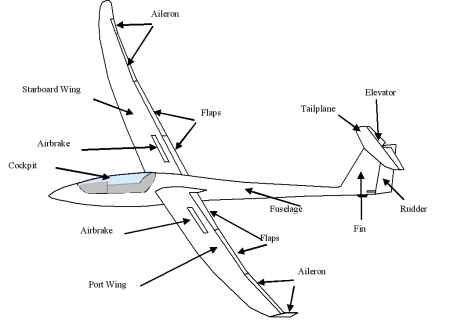 The glider has various controls that allow it to vary its attitude, speed and direction.

In perfectly still air, the glider will always be descending as it flies forwards – although compared to most other aircraft in unpowered flight mode this is quite leisurely because of the high aerodynamic efficiency.

Modern gliders can cover distances of around eight miles or more, while losing only 1,000 feet of height.

A typical flight will, however, be sustained for longer periods if the pilot can find sources of rising air, or ‘lift’. This can take the glider to much higher altitudes once it has released the winch cable, extending the possible range of the flight.